I teach Computer Science to some pretty amazing elementary kids.  Much of our time is spent doing lessons, puzzles, and activities from the Code.org curriculum.  We use Scratch and The Foos -- we play with Robots. We learn how to think through problems and find the most effective (and efficient) solution.  To do this, we start talking about five parts of computational thinking (Decomposition, Pattern Recognition, Abstraction, Algorithm Design, and Debugging) as early as Kindergarten.
Decomposition was the focus of this weeks Kindergarten lesson.  Decomposition is defined as breaking something into smaller parts.  With the “littles”, I introduced the idea with the following two websites from abcya.com :  Shapes Construction and Tangrams.  Both of these sites use “smaller parts” to build and create a larger image.  Decomposition in reverse…. so to speak.  The students and I talked about all the pieces and parts that are needed to build a house.

A roof!  Doors!  We need WINDOWS!  You have to have a floor!

After our discussion, I opened the Shapes Construction site and we talked about the design that we needed to create.  The design had been broken into all of its smaller parts and were listed at the bottom.  Our job was to put the design back together.  Boy — did they have fun! 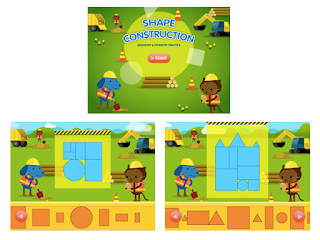 After a few levels, the activity ramped up and students were asked to complete the design with out some of the lines.  They had to look at the “mirror” image and recreate it.  (We had a nice talk about symmetry and reflections.)

Adding to this lesson, I had the kids work on another activity in abcya.com.  This time we went to the Tangram activity.  The concept is very much the same — but this time the students needed to “debug” the shapes.  Many times the shape needed to be rotated to fit in the puzzle.  Students had to identify which shape was needed and then how to make it fit by using the tools to rotate it.  The first level was full of helps — each shape was it’s own color and the targets were clearly outlined. 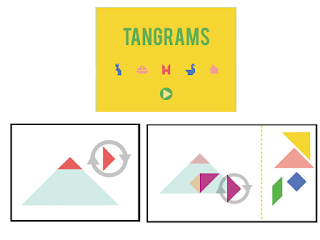 The upper levels became a little more challenging.  First, all the shapes became the SAME color.  Then, much to the Kinders chagrin — they lost the outline of the targets.

After a couple of reminders that

“They are the smartest and most amazing kindergarteners EVER!!”

they decided that they could indeed do anything they tried……..and they did.

Typo free comment now: They have the smartest, most amazing teacher EVER, too!

This is the first & best article to make me satisfied by presenting good content. I feel so happy and delighted. Thank you so much for this article.